"THE CLEAREST WAY INTO THE UNIVERSE IS THROUGH A FOREST WILDERNESS."
-John muir , 1938

Where is the diversity?
​Comparing plant distributions across the world 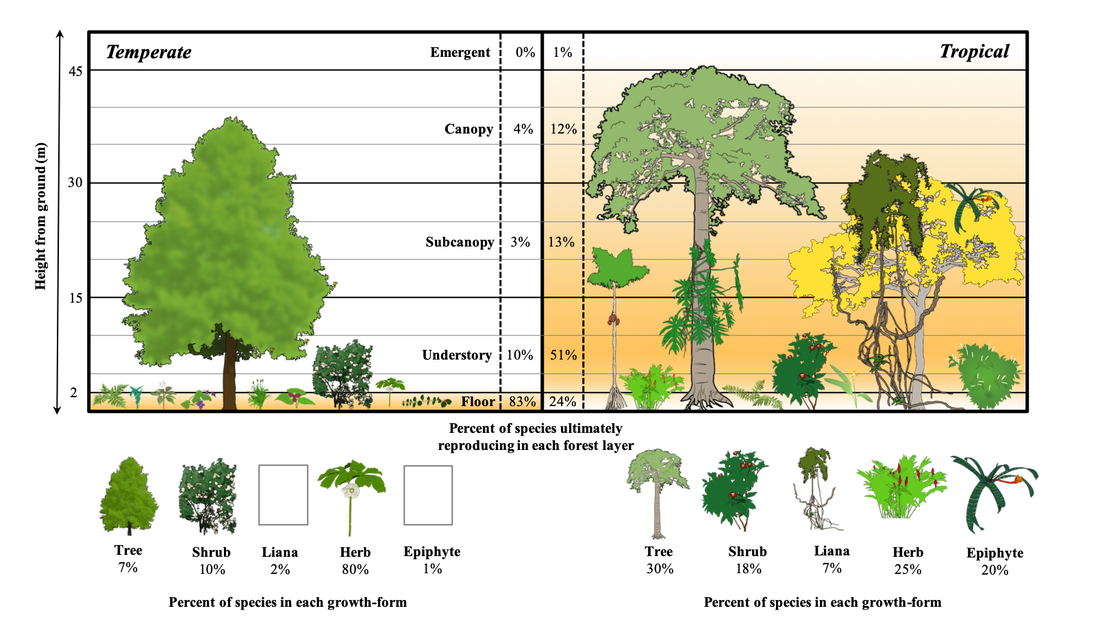 Accurate depiction of distribution of vascular plant species in the eastern deciduous (left) and tropical (right) forests in the Americas. Digital illustrations by Dr. Jackie Spicer.
Forests are the most diverse and productive terrestrial ecosystems on Earth, so sustainably managing them for the future is a major global challenge.  Yet, our understanding of forest ecology relies almost exclusively on the study of trees.  Here, we demonstrate unequivocally that other growth-forms (shrubs, lianas, herbs, epiphytes) make up the majority of vascular plant species in both tropical and temperate forests.  By comparing the relative distribution of species richness among plant growth-forms for over 3,400 species in 18 forests in the Americas, we construct the first high-resolution quantification of plant growth-form diversity across two ecologically important regions at a near-continental scale.  We also quantify the physical distribution of plant species among forest layers—that is, where among the vertical strata plants ultimately live their adult lives—and show that plants are strongly downshifted in temperate forests versus tropical forests.  Our data illustrate a previously unquantified fundamental difference between tropical and temperate forests: what plant growth-forms are most speciose, and wherethey ultimately live in the forest. Recognizing these differences requires that we re-focus ecological research and forest management plans to encompass a broader suite of plant growth-forms.  This more holistic perspective is essential to conserve global biodiversity.

We are following up this project in collaboration with the Kuebbing lab, digging in deeper to how plant traits vary among growth forms and across regions. In particular, we want to know how the proportion of native, non-native, and invasive plants varies between tropical and temperate regions. 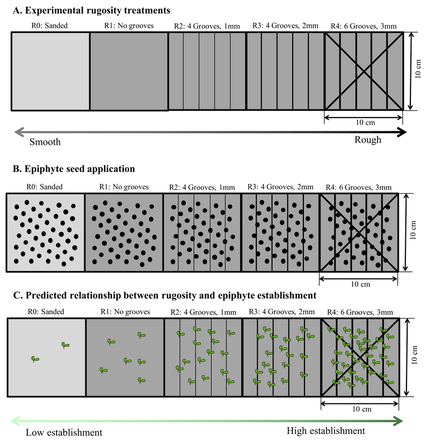 Experimental design testing how substrate texture affects epiphyte germination.
Although epiphytes make vital contributions to tropical forest structure and function, the mechanisms governing epiphyte community assembly are poorly understood.  The properties of substrates are likely critical to the establishment of diverse epiphyte communities, because of the inherently close connection between an epiphyte and its host tree.  However, little experimental evidence exists for whenduring ontogeny that host traits are most important, or what host traits drive epiphyte community development.  Here, we use an in situ experiment in the cloud forest of Santa Fé, Panama to test the extent to which substrate texture serves as a filter to epiphyte establishment. We experimentally varied the rugosity (roughness) of substrates derived from a native tree species, applied a mix of various epiphyte seeds to the substrates, and monitored seed germination and establishment over several months. We present some of the first experimental field evidence that substrate texture mediates epiphyte establishment. Rougher substrates facilitated higher epiphyte establishment, and epiphyte seedling abundances differed between the smoothest and the two substrates with the highest rugosity.  After just two months, less than 1% of all seedlings on average were present on the smoothest substrate while 34% of the seedlings remained on the second-roughest substrate. Epiphyte cohort survival rates differed among rugosity treatments, but nearly all germinated seedlings died after approximately one year.  Our results suggest that the texture of the substrate can account for some of the variability in epiphyte seedling survival at this early bottleneck stage. ​ 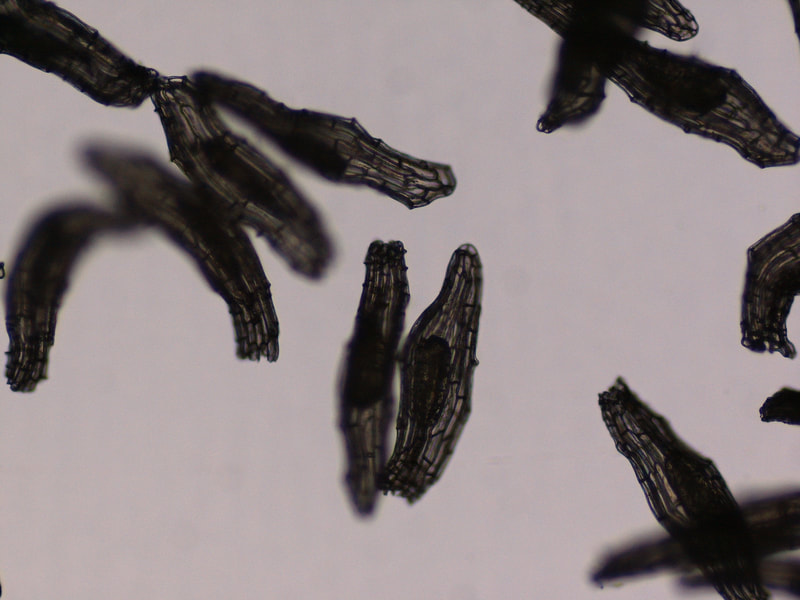 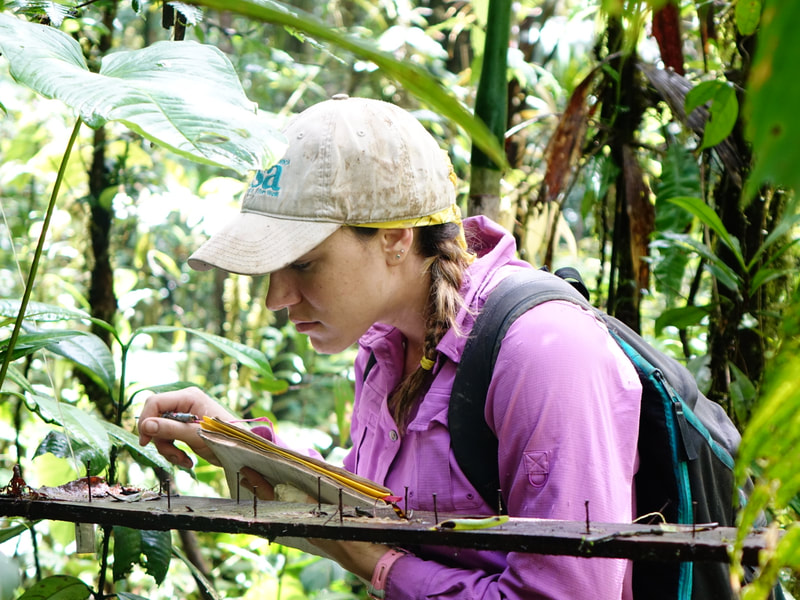 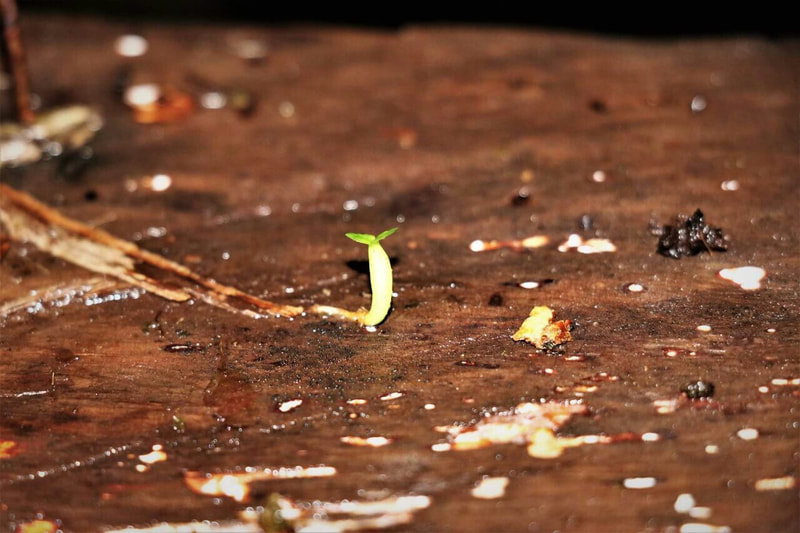 ​Epiphyte mortality: vertical niche differentiation or contact with the ground? 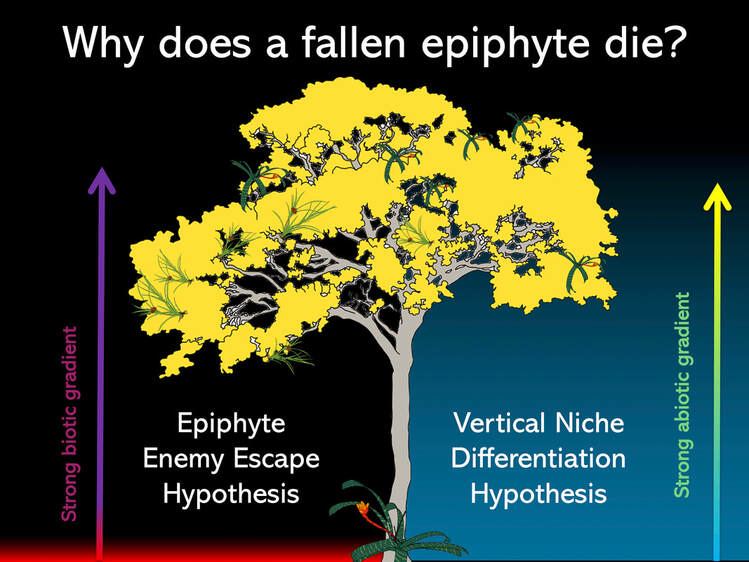 Epiphytes are characterized by their structural dependence on other plants to persist high in the forest profile and by their ability to survive without a root connection to the ground. Although epiphytes make up approximately one-fifth of tropical vascular plant diversity, the life-history and ecological trade-offs of this unique aerial growth habit remain largely untested experimentally.  Mortality due to falling from the host tree has recently been raised as an underappreciated driver of epiphyte community dynamics.  Mortality rates of fallen epiphytes generally exceed 70%, but little empirical evidence exists for why epiphytes do not survive when forced to become terrestrial.  Moreover, the variation in mortality rates of fallen epiphytes among taxonomic groups, and among epiphytes which reside in the same vertical strata, remains relatively unexplored. Here, we experimentally test two hypotheses regarding the drivers of epiphyte mortality in a cloud forest of central Panama. We test whether simple contact with terrestrial soil is deleterious to epiphytes, preliminarily testing the Epiphyte Enemy Escape Hypothesis. We also test the Vertical Niche Differentiation Hypothesis, wherein epiphytes are specifically adapted for microsites throughout the vertical forest strata.  By monitoring leaf loss, health status, and mortality of 270 transplanted epiphytes for nine months, we pinpoint the extent to which distance from the ground regulates epiphyte mortality.  We found support for both of our hypotheses.  After nine months, leaf abundance was 40% lower in epiphytes that were in contact with the ground in comparison to those transplanted just above the ground.  Likewise, epiphytes in contact with the ground had a 26% lower survival rate versus epiphytes transplanted a few meters higher.  Mortality rates were also mediated by original height where the epiphyte occurred in the host tree prior to transplanting.  Our results demonstrate that contact with the terrestrial soil regulates early fallen epiphyte mortality, and epiphytes that occur high in the canopy are particularly vulnerable to mortality via falling.  These results have important implications both for fundamental ecological theory and for biodiversity conservation management.  Follow-up studies should explore the role of terrestrial soil microbes as potential drivers of decreased grounded epiphyte survival.  Moreover, the high success and survival rate of epiphytes transplanted above the soil surface highlight an overlooked management technique: moving fallen epiphytes to nearby trees could help increase establishment or population stability of epiphyte communities.  This would be particularly useful in relatively epiphyte-poor secondary forests and small forest fragments.

​Project presentation:
​Spicer ME, Ortega, JA, & Carson WP. “If an epiphyte falls in the forest, why does it die? Experimentally testing drivers of vascular epiphyte mortality.” SACNAS: The National Diversity in STEM Conference (Virtual). 19-24 Oct 2020. 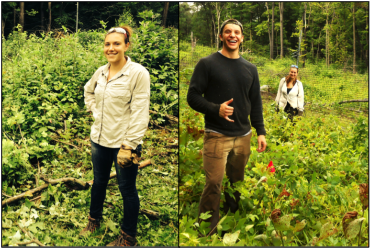 Vegetation removal team, summer 2015. From left to right: Michelle Spicer, Kyle Suess, Laíssa Leonis do Canto.
In the past few decades, eastern deciduous forests have experienced dramatic declines in herbaceous biodiversity of up to 90%, as well as large-scale shifts in dominant tree species from oaks to maples.  In collaboration with the Carnegie Museum of Natural History at Powdermill Nature Reserve (Rector, PA), I am investigating how natural and anthropogenic disturbances interact to change plant community dynamics.  Specifically, I am experimentally testing how deer herbivory, a dense recalcitrant understory layer, and salvage logging simultaneously impact forest regeneration after a large-scale (~30 acres) tornado blowdown.  Three prevailing forest succession models underlie this experiment, and will be tested in the upcoming few years:

﻿Shade tolerance model: The regenerating plant community will be dominated by fast-growing, shade-intolerant pioneer species post-disturbance (such as tulip poplar); salvage logging will further enhance dominance by increasing disturbance severity.
Priority effects model: Over time, existing understory species will dominate disturbed sites and then shift towards more long-living species; post-vegetation removal, the “successional clock” will be re-set, and species extant in the seedbank will dominate the regenerating forest.
Mammalian browse model: Browse-resilient species such as American beech will dominate disturbed sites even after logging and vegetation removal, as recent evidence suggests the legacy of overbrowsing lasts decades.﻿

As a side project nested within these experiments, I am also studying tip-up mounds as putative refugia for deer browsing, and how salvage logging modifies plant community composition after natural disturbances.

An ecosystem engineer in the Neotropics?
​Direct and indirect effects of mammalian browsing on tropical forest succession 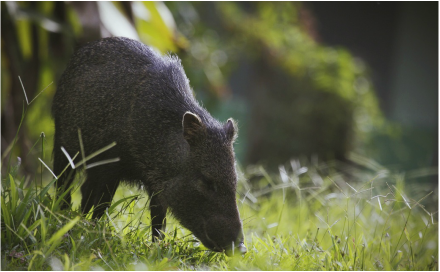 Where have all the wildflowers gone?
​How legacy effects of overbrowsing promote depauperate forests 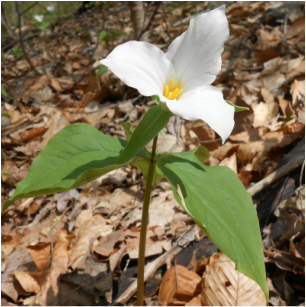 In eastern deciduous forests, a legacy of deer overbrowsing has replaced a diverse herbaceous understory with a recalcitrant layer of American beech (Fagus grandifolia) and maple (Acer spp.).  In continuation of a long-term research project in northwestern Pennsylvania, I am testing a mechanistic hypothesis for these depauperate understories: recalcitrant saplings limit wildflower density and diversity by reducing resource availability on the forest floor.  To address this hypothesis, I will monitor herbaceous and woody community response after removal of the recalcitrant sapling understory layer (beech and maple saplings) in existing deer exclosure plots and adjacent control plots.  Preliminary results from the summer 2015 field season (3 years after removal treatment) demonstrate strong shifts in herbaceous and woody community composition with removal and deer treatments, and increases in herbaceous diversity with recalcitrant understory removals.
I was also interested in the direct effects of seed predators on recruitment success in the understory, so used motion-sensor camera traps and experimental seed additions to figure out who was removing propagules from the understory. See the photos below for some answers. 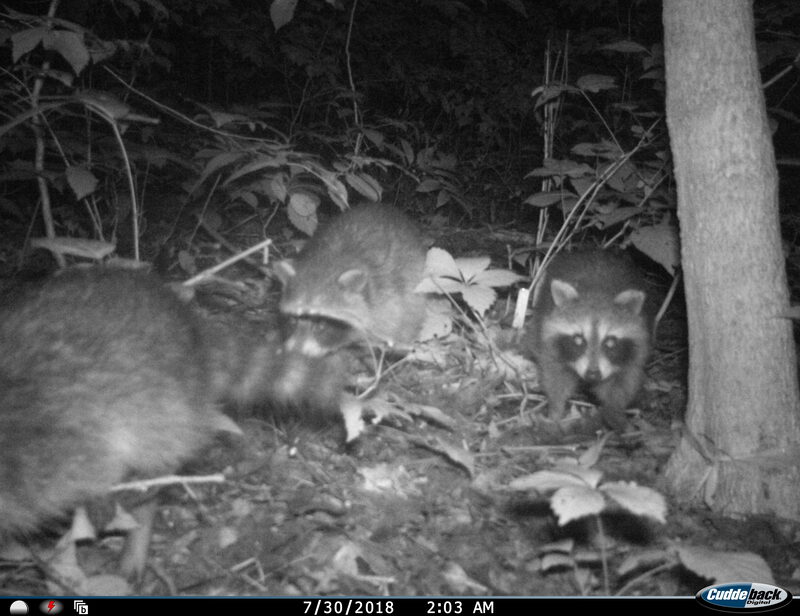 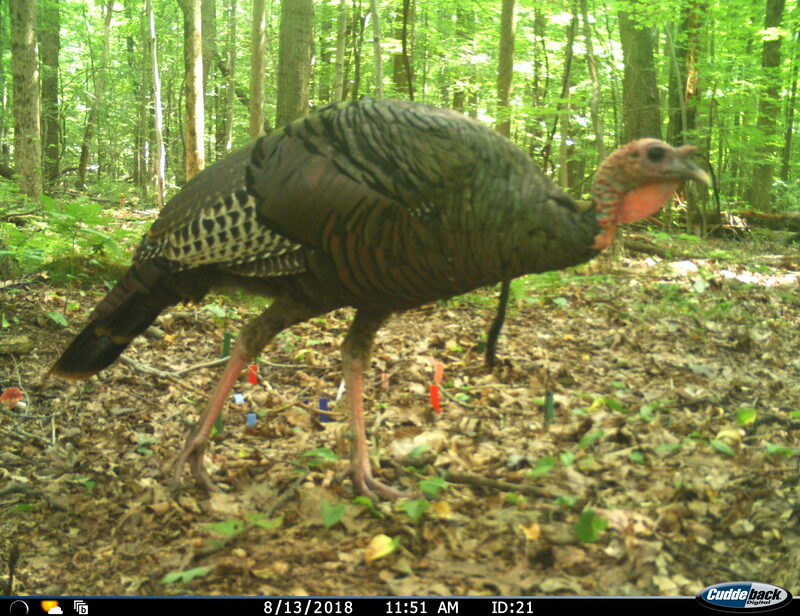 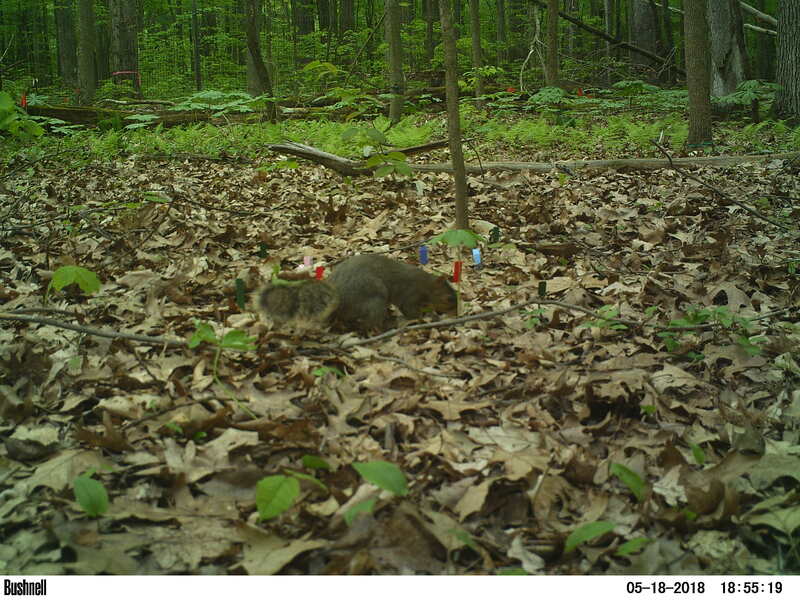 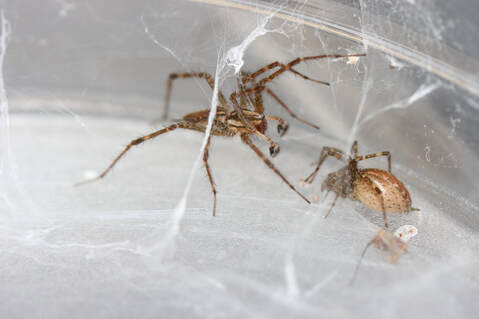 Effects of temperature on the foraging behaviors of tropical canopy ants

Ant foraging in experimental trial on BCI, Panama.
In collaboration with the Yanoviak lab, I worked on an ant behavior field experiment on BCI, Panama,  to understand ectothermic adaptations to variable thermal microclimates.  We used field and lab experiments to test how foraging  behavior of several species of tropical canopy ants changed across various heat and light regimes.

In the forgotten forest

For my Masters research, I studied forest succession in the Lehigh University Experimental Forest with Bob Booth. We reconstructed the history of a planted forest rediscovered after 100 years, and compared that to a nearby unplanted reference forest. The legacy of the planting was very clear even after a century, and some species did a lot better than others.
https://intheforgottenforest.wordpress.com 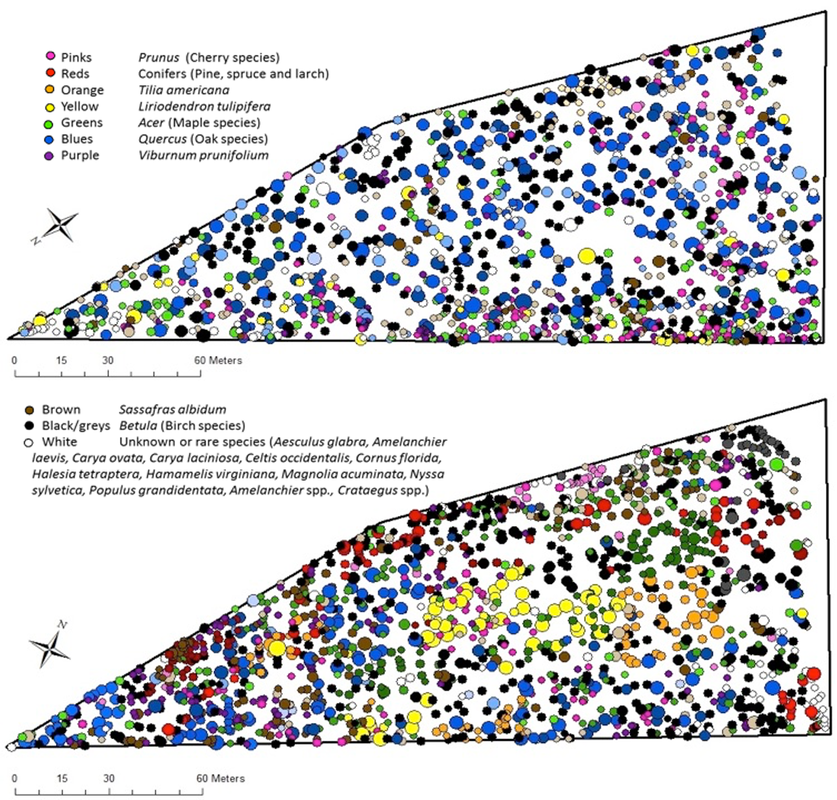